On September 11th the world will stop to remember one of the saddest days in history. As a former member of the Rockville Centre community on Long  Island, I shall never forget the horror of devastation that rocked our small village. Forty-five members perished in the event on an ordinary day. A child lost her mother during the attack and a group of high school seniors grieved this loss during a candlelight ceremony. The town wept as did the state and nation for their losses during the horrific event.

Last night while watching the ABC News Special 20/20 show, Women of 9/11:Twenty Years Later, with Robyn Roberts, I felt all over again the sting of sorrow, the disbelief of the happening, and the sadness that still exists. I turned to my blog posts regarding 9/11 and created a blackout poem prompted by this haunting photo. 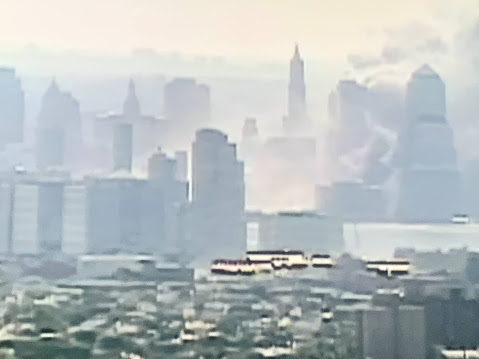 So Many Stories, So Many Hearts Broken: A 9/11 Recollection

Nation remembers:
People perished,
New York City suffered.
Incredible sadness
Blasted air.
Tears touched the community.
Heavy hearts mourned
In solidarity.
Anguish witnessed attack.
Disbelief, despair
Rose from ashes.
Charcoaled faces,
Chaos, grief grew
In wake of disaster.
9/11, harsh reality,
a retold journey.
©CVarsalona, 2021
Yesterday, the nation paused to remember a horrific event in its history. On September 11, 2001, a never-to-be-forgotten date, 3000 people perished in the attacks on the World Trade Center and the Pentagon. Of that number, Rockville Centre, a small suburb of New York City, suffered considerable losses. 48 of my townspeople people died as a result of the "largest attack on US soil" on that fateful day.

I shall never forget theincredincredible feeling of sadness mixed with panic as colleagues and I heard the news the morning of September 11, 2001. As the media blasted the air with news, it was very difficult to continue the day of elementary school as usual. Colleagues tried to connect with loved ones who went to work in New York City; worrisome looks multiplied; phone calls were interrupted; tears shed. When I arrived home, news of the attacks were haunting the neighborhoods of Rockville Centre.  A small group of concerned South Side high school students, my daughter being one of them, were touched by the events of the day that deeply affected one of their classmates.  The concerned peers formed a bond and brought the school community together in support of their friend whose mother was killed in the World Trade Building terrorist attack while her father was out of the country on business.
That night, students, heavy in heart, led a vigil march through the neighborhoods. The sky, lit up by hundreds of candles held in the hands of mourners and supporters, marched in solidarity, bringing a town together during a time of deep anguish. Many people were not among the group, my husband being one of them. Although safe, he was forced to stay in New Jersey that night. Entrance back to Long Island was closed. After hours of no contact, he did bring us news of what he witnessed. As traffic slowed on  road from NYC to New Jersey, he, along with many motorists, saw the second plane attack the World Trade Center. During a night of disbelief and despair his story as well as many others rose from the ashes Wof a grim fate. There was the friend who led the NYC Bomb Squad searches; the first responder who traveled from Suffolk County to NYC to support the ravagedorld Trade Center; other friends who walked across the Brooklyn Bridge to come home from the havoc that ensued on Wall Street. There was the brave fireman from our next town who lost his life at the site and dozens of Rockville Centre neighbors who never came home from work that night. There were the charcoaled faces, broken dreams, and voices that could not speak of the horrors witnessed. But in all the chaos and grief, the town bonded and grew strength from each other. Ceremonies, monuments, memorial parks all created during the weeks that followed allowed a town to heal in the wake of disaster.
The remembrance of 9/11 is a heavy one that never leaves one's heart. In our neighborhood, and across Long Island to New York City children were forced to deal with a harsh reality that life is fragile and dreams can be broken. Paralleling that message was the belief that hope can exist in a town despite devastating losses. Rockville Centre Mayor Francis Murray, summarized this feeling during his memorial speech on Sunday, September 8, 2013. "No community suffered more than Rockville Centre...but we did not just survive this tragedy, we prevailed."

Stories have been told, repeated, and retold over the past twelve years. Hearts have been mended, but Rockville Centre community members never forgot the losses. September 11, 2001 marked the day for a town to be brought to its knees. Subsequent years have marked the evolution of 9/11 stories into messages of courage, survival and new learnings about life's fragile journey.
WE REMEMBER
as the bell tolls,
names are read,
flags unbound, waving proudly,
and heartbreaking headlines shared.
There's Still a Sadness in Hearts on 9/11.
So Many Stories, So Many Hearts Broken!
Remembering 911 Fallen Heroes,
numbered in the sky,
is our town's tradition.
Village Green is ready.
We shall remember
and wait for a
Rainbow of Possibilities.
©CVarsalona, 2019, Rockville Centre, NY

It's time to join the Poetry Friday Roundup at The Miss Rumphius Effect. Tricia Stohr-Hunt, our host this week, offers a Barbara Crooker poem on grief.

Posted by Carol Varsalona at 2:07 AM