Reflecting on the Super Moon Phenomenon

Last Saturday, July 12th there was much hype about the Super Moon. As the days approached, I wondered if it would be as magnificent as news accounts depicted it would be. When I actually saw it shining so bright and full I was in awe of the universe. I stood mesmerized and started to recollect the times in my childhood when I engaged in the same act of watching the full moon at night. Riveted, I looked into the dark sky to see the crater face of Mr. Moon, all ablaze and peeking out at me between the trees. I captured its sight but I must admit the photo taken with my iPhone did not do justice to the Super Moon's beauty. What I saw was the best and clearest image of the moon's "crater-made face" that I have ever seen.

Continuing to stare intently into the sky, led me to think of the countless children around the world that were doing the exact same thing I was doing - just silently staring! Subsequent to this event, news article, photos, and tweets began to surface speaking about the wonders of the image in the sky. Although my photo of the man in the moon face pales in comparison to some on Twitter, I appreciated the beauty of what I saw and wanted to share my enthusiasm for this phenomenon.

The found poem below was written from words lifted from news articles and quotes about the Super Moon night sky event. My goal was to create a poem that would speak to the experience of moon gazing on a dark summer night from a reflective stance. 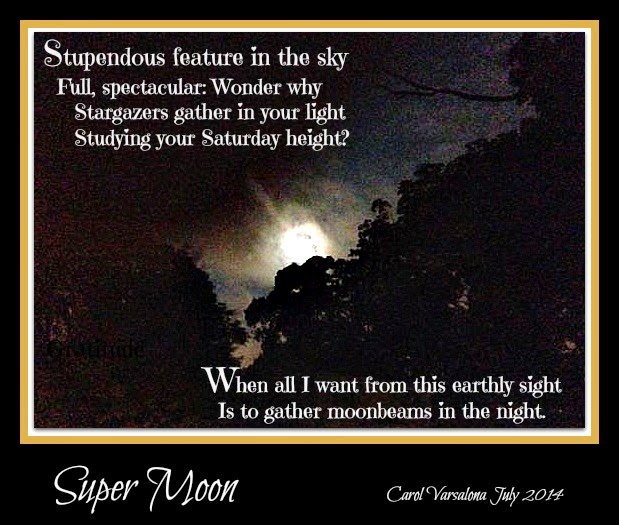 The following are resources for children that I found about "moon poems" that can used during the school year.

The child's wonder
At the old moon
Comes back nightly.
She points her finger
To the far silent yellow thing
Shining through the branches
Filtering on the leaves a golden sand,
Crying with her little tongue, “See the moon!”
And in her bed fading to sleep
With babblings of the moon on her little mouth.

The Moon - A Children's poem
https://www.youtube.com/watch?v=CSyPs8BW9EM 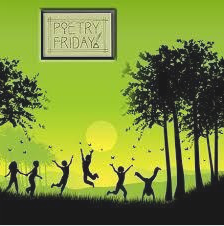 Today Tabatha Yeatts is hosting the Poetry Friday roundup at The Opposite of Indifference with her whimsical feathered friend, Poetry Monster.
Posted by Carol Varsalona at 10:28 AM