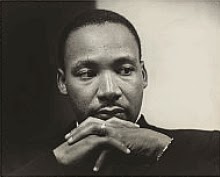 There are those Americans who blaze trails, opening doors for new possibilities, whose words echo throughout the land, and who courageously act to bring about change.  Martin Luther King, Jr. was one such man. His courageous thoughts and deeds impacted others during a time of unrest in America. On January 20, 2014, America paused to reflect upon the contributions of this national hero whose charismatic style and sense of advocacy for equality and equity caused him to be  immortalized in history.

In a complex, 21st century world, the words of King ring true in American education as a beacon of hope for those seeking balance in a diverse world. Almost forty-six years after King's assassination, topics of equity and equality are still the focus in American educational systems. Students marginalized by their ethnicity, cultural backgrounds, abilities, and perspectives, face bullying, isolation, and underachievement. Multi-faceted issues nag at the core of equal access to education, creating rifts and gaps in the path. Social, emotional, and academic learning is valued as an pathway for finding solutions to the perplexing issues in present-day American education. With the call for action at hand, administrators and teachers continually seek the path from the dream to reality for advancement in education.

While we can no longer stand in the presence of Martin Luther King, Jr., we can reflect upon his message, honor his words, and be prompted to ready all youth for college or career.  John Blake of CNN News noted that many Americans think of King as a "one dimensional figure" due to an unfamiliarity with the variety and depth of his many other speeches. Upon a closer look at King's messages, it is evident that his strength of character was visible. From the iconic pictures of Dr. King at the Smithsonian Collection to the 1962 uncovered MLK speech recording at the New York State Museum, Martin Luther King, Jr. will be remembered for building one of the cornerstones in American history.

As we mark the days after the celebration of this American hero, it is important to reflect upon Kings's words that can lead educators to revitalize the system and to equalize the playing field. As King said, "The function of education is to teach one to think intensively and to think critically. Intelligence plus character - that is the goal of true education." With this goal in mind, we, as educators, can assist students to become critical thinkers of the 21st century, filled with character and propelled by the tenets of social, emotional, and academic learning. We can build this world for students through careful modeling and the belief that all children can learn and have the right to an equal opportunity to learn. 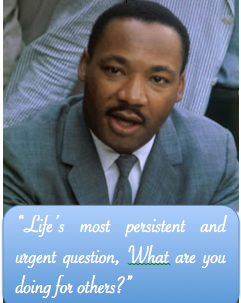 If Martin Luther King, Jr. were in our presence, his words (see above) would be the prompt for educators to reflect and question their motives for entering the profession. John Dewey said, “We do not learn from experience…we learn from reflecting on experience.” Let us honor the words of Martin Luther King, Jr. in a way that allows us to not only reflect on them but use his words to learn and lead students on the path to a quality education for all.
Posted by Carol Varsalona at 7:52 PM