Teaching Pirate Style to Bring Passion to the Classroom

When I first heard of the TLAP (Teach Like A Pirate) phenomenon, I wondered, "Pirates in Education! Really?" Little did I know that there could be a "good" connotation to the word, pirate. The "aha" moment followed after virtually meeting Dave Burgess, the pirate-teacher himself, during two different Twitter chats. I credit all to my #nyedchat co-moderators, Vicki Day and Tony Sinanis, who had the good sense to facilitate book studies and Twitter chats using Teach Like A Pirate as the core for generating active discussions about teaching. With each chat that I engaged in, I felt a certain comfort with the notion of pirates in education. Linking this with a warm, engaging memory of  Disney World's Pirates of the Caribbean exhibit, solidified the image. Pirates are passionate risk takers setting their course and moving full speed ahead with gusto toward their treasure.

Dave Burgess, the lead learner of the pirates in education community, brings a zest for learning to the classroom in his book, Teach Like A Pirate. His thoughts empower teachers to become risk-takers and innovators. As they artfully hone their craft, they dig deep into lessons, make learning come alive, and in turn, empower students to become lifelong learners and meaning makers. Dave Burgess, an inspirational teacher and speaker, delivers a powerful message on transforming the classroom into a powerful place of teaching and learning and brings a fresh look to what education has to offer young learners.

With a handful of hope (phrase taken from the mini-series, Klondike) and a genuine desire to grow #nyedchat into the Voice of New York State, I pursued the NYEDChat Moderating Team's dream to reach out, connect, and bring notable figures in the education and Twitter worlds to our bimonthly chat forums. Dave Burgess, wishing to spread passion for teaching and learning, agreed wholeheartedly to co-host a chat with us and so the story of #nyedchat hosting its first transcontinental network connection with the lead pirate of education unfolded. 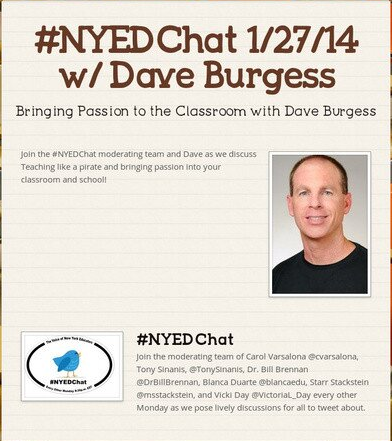 Intrigued by the prospect? Tune in to #nyedchat on January 27, 2014, 9:00 EST for a conversation with Dave Burgess, author, teacher, and pirate extraordinaire. #nyedchat will combine with #TLAP (teach like a pirate PLN) to broaden its scope and connections across the states. Be brave. Be daring. Even if you are not a tweeter, you can lurk and learn with the NYEDChat and Teach Like A Pirate professional learning networks. For first time tweeters, following the Twitter conversation as a lurker allows access to fast-paced thoughts without having to worry about tweeting.

There will be no walking the plank on Monday night, only perching on the edge of your seat to capture thoughts on how to "increase student engagement, boost your creativity, and transform your life as an educator." (from Teach Like A Pirate book cover) Join the NYEChat Moderating Team of Bill Brennan, Vicki Day, Blanca Duarte, Starr Sackstein, Tony Sinanis, and me, as we don our pirates hats and connect with Dave Burgess on January 27th from 9:00-10:00 PM EST.


From East to West, NYEDChat connections will broaden, bringing topics of interest to our viewers.

Reminder: On Monday night, go to twitter.com and type in the hashtags #nyedchat and #tlap to become a spirited pirate of teaching and learning.
Posted by Carol Varsalona at 10:15 AM