Between Twilight and Night

In the sliver between twilight and night,
when the world seeks rest,
nighttime sings its lullaby.
Summer sounds of childhood,
once forgotten, hum their tune
rocking infants to sleep as nature
blankets earth with a slumbering darkness.
Nighttime sings its evening song,

a chorus of chirping sounds
from the woods at the edge of the trail,
in the sliver between twilight and night,
when the world seeks its rest.
I listen. Peace flows. 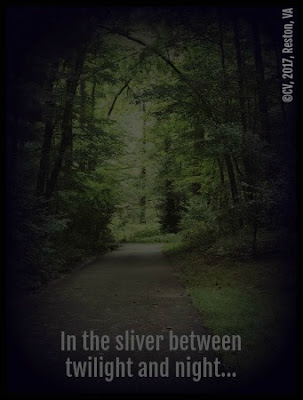 The idea for the above poem evolved initially from my poetry friend, Linda Mitchell, the host of Poetry Friday this week. She presented a slate of first lines from her writer's notebook and asked writers to choose one and then give one in the spirit of connectivity.  I chose, "In the sliver between twilight and night" for several reasons. While visiting my new granddaughter in Reston, Virginia, my husband and I acquainted ourselves with the night sounds at the edge of the trail. The sounds were so distinct and reminiscent of childhood sounds that it made an impact on me. While walking the trail alone during the week, I encountered many a sight and sound that was far different from the ocean sounds of Long Island. You can find many more first lines and image prompts at Linda's site, A Word Edgewise.

Posted by Carol Varsalona at 8:54 AM