“Life is fragile and uncertain.” I thought this notion about life was tucked away in a corner of my heart, but little did I know that it would pop up today.  I should have listened to the internal voice calling out to me as I packed my bags. “What would happen if my luggage doesn’t make it to your destination?” Since the weather one of those beautiful July days and I was on time, I dismissed the thought. After all, I was on my way to present at the International Literacy Association 2015 Conference in St. Louis and the day seemed to be filled with the promise of adventure. New learning and meet-ups were sure to occur, so I embarked on my short journey with a spirit of positivity.

ARRIVAL
Once I arrived at LaGuardia Airport, I thought nothing of a supposed computer system glitch. Although I had priority access and a boarding pass sent to me via email, the arrival clerk’s computer was not allowing her to see the seating plans. I was assured that the gate officials would straighten out the issue but when I arrived at Gate C8, there was a commotion. A group of disgruntle passengers were ushered off the plane. I never got the full story from the clerk who dismissed my questions as she told me to have a seat in the waiting area. Obligingly, I went to meet my friend, Michele Haiken, for the first meet-up of the day. Michele just happened to be sitting next to Jason Reynolds, the YA novelist. I recognized Jason from an NCTE 14 introduction by Kwame Alexander of Newbery Award fame, so I reintroduced myself. An interesting conversation ensued: memories of Walter Dean Myer, Jason’s mentor, sparks of thoughts about fellow authors who live in close proximity to Jason in New York City, and tidbits about Jason’s books. 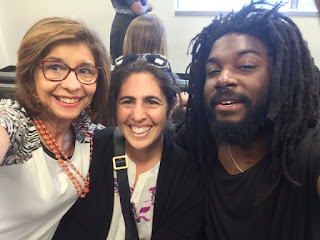 BOARDING
Boarding was uneventful until a delightful passenger sat next to me and alerted me to an unexpected issue. Seven to eight passengers were soon to be told that they had to exit the plane due to weight issues of the small aircraft. In a few minutes, my name was called despite the fact that I had priority access and a boarding pass issued the day before. This sent me into such a tizzy that I left my computer behind. I must admit that the positive frame of mind that started my day was quickly lost. I had what I call, a lapse of judgment, and started stressing over how I would get to St. Louis. Positivity was far from my reach. This I regret but because of the camaraderie of a group of seven other strangers, one of whom I knew, I was able to move from a high stress level to a calmer one.

What follows are my poetic thoughts about the airport mishap. 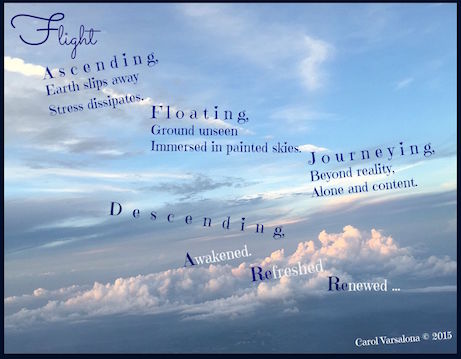 REBOARDING
The ending to the story is a positive one for the moment. I found a silver lining at the end of a disjointed flight. Through the humanity of others who banded together and a baggage clerk who retrieved my phone on the second flight, lemonade was made out of lemons.

DESTINATION
Off to enjoy #ILA 15, frazzled but glad to be on the ground in St. Louis.

PART II:
Stay tuned because there is more to the story...

Because I have been preparing for presentations and facing computer issues, the above post has been delayed. A new installment of Positivity Undone and Renewed will be out soon. In the meantime, please visit Two Writing Teachers for the Tuesday Slice of Life. I missed writing a slice last week so I am excited to be back writing and visiting slices from friends I met in St. Louis.

Posted by Carol Varsalona at 1:20 PM