Aftermath of a Storm

Recently, with memories of Superstorm Sandy that ravaged Long Island during late October 2012, Long Island prepared for potential issues related to Hurricane Joaquin. When the storm passed us by, everyone let out a sigh of relief. Days later, as Indian Summer settled it, I took a walk with my family to the south shore to see how the beach held up. Upon returning home, I wrote a haiku. The original photo was digitalized with the photo-editing tools, Waterlogue and PicMonkey. 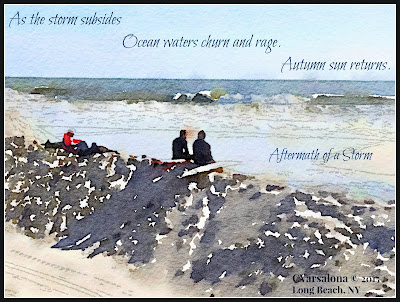 Today, I drafted a narrative poem accompanied with digitalized photos to tell the story
of what I saw in the aftermath of a storm.

In the warmth of the Indian Summer sun
that streamed from sky to shore,
he reached out to catch a wave
rushing from ocean's floor. 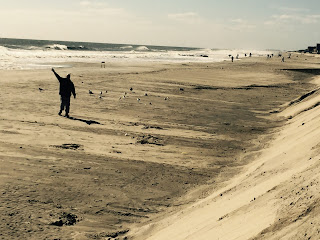 Walls of sand soundly fortified the beach.
Mighty bulwarks piled ever so high
left hints in wake of ocean's wrath -
as he quietly walked miles on by. 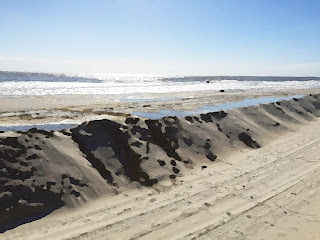 On mounds of sand they silently stared,
waiting for ocean's fearless roar
to ride the thunderous ocean waves,
that were sliding fast to shore. 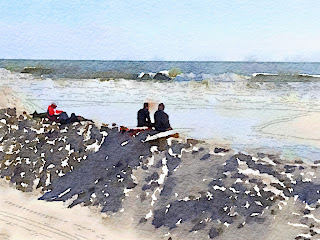 Strolling  the beach I noticed and wondered,
recalling moments from summer's past.
that led to an October day featuring
a shoreline receding ever so fast. 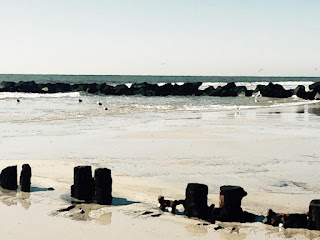 As Indian Summer kissed the shore
autumn greeted a bright, crisp day,
with the promise of finding fall at
Long Island beaches and its bay. 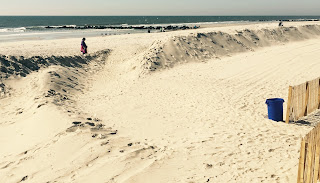 Listen to In Waves of Indian Summer to reflect upon the blessings of the earth.

May your Indian Summer days be filled with warmth and unfolding dreams.

Please visit Amy Ludwig VanDerwater at The Poem Farm where she is cheerfully hosting the Poetry Friday Round-up. Her welcome is a wonderful invitation to enjoy the party.

Come One! Come All! Poetry Friday is Here!

Welcome to this Week's 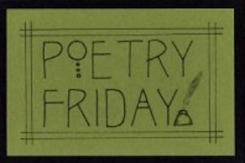 Welcome to the Poetry Friday Roundup! Join me as I pause for a  brief poetic tribute to Summer 2022. Under a painted sky, Ornamental grass s... 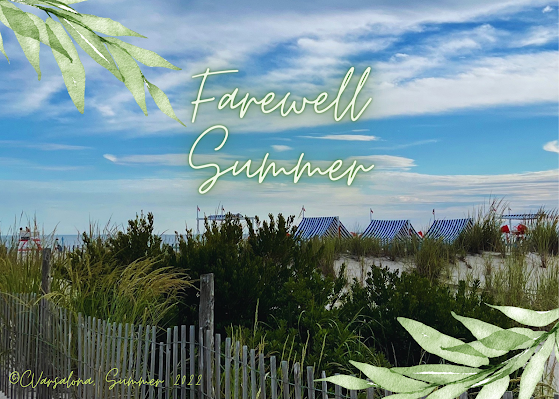