Let There Be Mercy

The world has been touched by Pope Francis' trips to the United States but behind the Pope's gentle demeanor, humble spirit, and caring attitude is a man of character with powerful words to impact life. His sermons and speeches have been quoted and featured in news articles around the globe. As the champion of diversity he constantly reminds us to be kind-hearted, embrace all humankind, and rediscover mercy.

As a child I was taught the spiritual and corporal works of mercy in catechism class but truthfully I cannot repeat the list I learned years ago. When Holly Mueller leader of the Spiritual Journey Thursday community decided that mercy would be this week's topic, I immediately thought of Pope Francis who speaks out on forgiveness. After reading a few of his homilies, I found that on April 10, 2015 he declared this year to be a Holy Year of Mercy.

What is mercy? It is the gift of forgiveness and help and benevolence in a world of strife. Self-mercy is important when we want to make a difference in our life and that of others. Forgiving our failings and missteps allows for an unburdening of stress as we move toward finding a better way to enjoy life. Mercy is also seen as a hand outstretched to those who need support.

As part of Random Acts of Poetry Day today, I sent out digitalized poetic messages through Twitter to spread inspiration with the hope of lighting up hearts that may need support. One of the corporal acts of mercy is to give drink to the thirsty. While this message is not a liquid for the body it is a shot of inspiration for the soul-a look at the beauty of autumn and the bounty of the world. 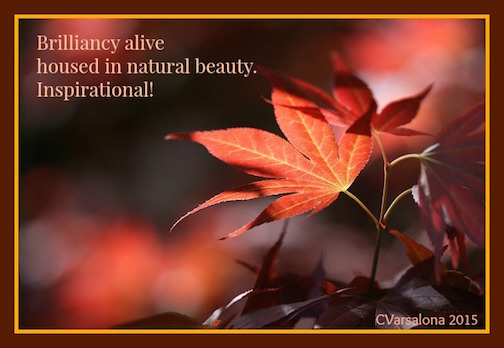 Pope Francis asked the world last April to "rediscover the spiritual works of mercy" also. In looking back on this week, I tried to be patient, counsel the doubtful, and pray for the living who need support. As Pope Francis said, Jesus spoke words of love and mercy "which are an invitation to conversation". My wish this week is that I invite others into conversations that will rediscover mercy.

Pope Francis summed up mercy beautifully in his Angelus on March 17, 2013,

In the past few days I have been reading a book by a Cardinal ... Cardinal Kasper said that feeling mercy, that this word changes everything. This is the best thing we can feel: it changes the world. A little mercy makes the world less cold and more just. We need to understand properly this mercy of God, this merciful Father who is so patient. ... Let us remember the Prophet Isaiah who says that even if our sins were scarlet, God's love would make them white as snow. This mercy is beautiful.

Posted by Carol Varsalona at 9:12 AM