From Light to Dark

It all started with a beautiful Indian Summer day. You know the kind. An autumn day that you calls you to celebrate with family and friends outdoors. I started to look at my Halloween Weekend checklist and realized that I could pull together an autumn gathering in six hours (with a little help from my husband and son) and so the day began.

The aromas from the grill outside and the baking oven inside were blending just right and added to the anticipation of guests arriving at 3 o'clock. When all who were able to attend joined us on the patio, we  gave thanks for decades of friendship and marveled over the end of October weather. We quickly mentioned those those who could not attend and set out to begin our pre-Halloween fun at what we later called our progressive dinner.

Tinkling of glasses started the autumn afternoon at the appetizer table. Next, we traveled to the outdoor dining table to enjoy butternut squash soup and kale-apple-onion salad. The candle light was glowing, just for effect since it was mid-afternoon, and the sun was shining brightly. 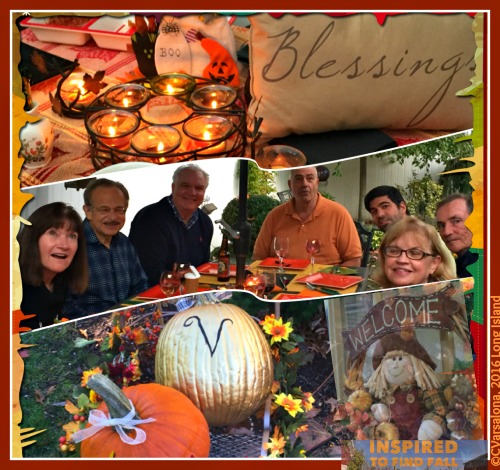 Then, off to the north we caught a glimpse of a grayish touch to the sky.

News flash:
A storm was brewing but it was an hour away.

We all laughed and wondered how could that be. As soon as we dipped into the salad, a leaf storm kicked up so suddenly that the group just watched and stared at the phenomenon. Quickly, we scurried to grab as many items as we could to move inside.  Too Late!  The cloud turned dark and the rains pelted us. By the time we got inside, we were all soaked. Our hair, clothes, and napkins took quite a beating.

That incident did not dampen our spirits. The glow of lit candles, fall decorations, and the sight of a significant storm gave us pause to celebrate memories. We reminisced about the progressive dinners when we first moved into the neighborhood.

Who would have thought that a day that started out so bright would turn so dark? A round of continued laughs made for four hours well spent at our various venues, outside and inside.

Final reflection: I must admit that I have never been in a storm that arrived with gusto like the one on October 30th.

Positivity and laughter are essentials in life.
Were you affected by the quick turn of events in weather?

PS: My daughter told me that the storm hit Virginia while she and her husband were bicycle riding. They, too, got soaked.

It's Slice of Life Tuesday so please turn to Two Writing Teachers to read what other slicers are writing today. 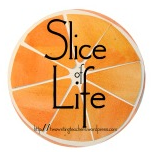 Posted by Carol Varsalona at 8:28 PM