Paint the Earth in Whitish Hues

My positive approach to this year's winter season, is quit a departure from years past. I am taking on the watch, listen, and learn attitude as the weather conditions go from blustery and too cold for walking to less cold. During the storm that hit many states, I watched the snow fall for two days and listened to whatever sounds came my way. Eager to write about what I witnessed, I learned to be patient with my words. They needed some prompting to circle the scene I watched outside. Then, slowly they appeared, ready to descend on paper as fresh as the new fallen snow.

The photo below does not do justice to the dancing pattern of the snowflakes I witnessed, but it will suffice. The poem nestled next to the image, still needs to be refined. Both are as rough as the jagged rocks in the garden covered by a blanket of white.  But isn't that what writing is all about-taking a piece and crafting it, and then refining into a little gem of merit? There is more to this poem but it just isn't public ready so the ending will have to wait until winter whispers to me again. 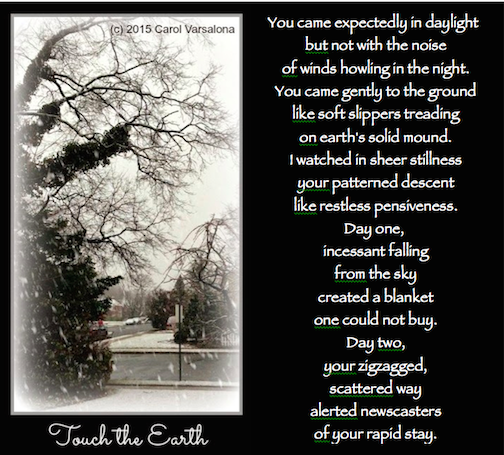 And now to hear Longfellow's whisperings of winter. 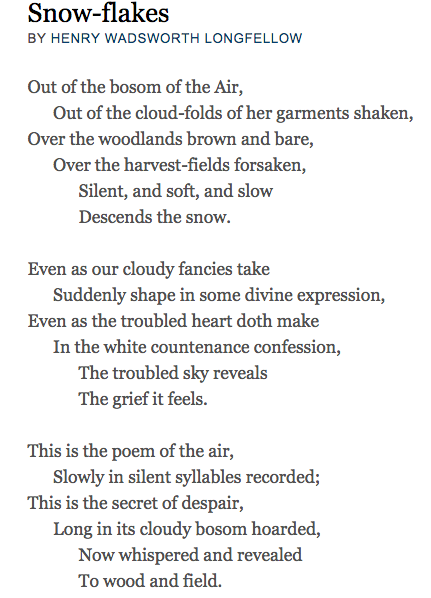 I humbly offer my own writing next to Longfellow's to illustrate the difference between a master and an apprentice. Comments from fellow Poetry Friday members on how to refine my thoughts would be greatly appreciated.

Poetry Friday is here to bring good cheer at the beginning of the year.
So stroll over to Irene Latham's Live Your Poem site for the MLK edition of Poetry Friday.
Irene is sharing two poems from the Cybils finalist VOICES FROM THE MARCH ON WASHINGTON ON WASHINGTON, Poems by J. Patrick Lewis and George Ella Lyon, and an original poem hewn from the Dr. Martin Luther King, Jr.'s I Have A Dream speech.

Posted by Carol Varsalona at 8:37 AM