Summer nights grow shorter now but still fill the sky with wonder. The recent indigo nights with starless skies remind me of years ago when my children were young and our club held an annual Rockville Links Aqua Show in late August.

At dusk, festivities would begin. Young aqua performers, pumped with pride, faces full of glitter, blush, lipstick or face paint paraded under lights that glowed. As dusk turned to twilight, the awaited show began with music and merriment. Young swimmers who worked for weeks at their routines proudly appeared on cue. The cleverly choreographed, Esther Williams-style, water ballet numbers were followed by the boys' humorous antics of crazy dives, slide slipping, and water marches. Even my husband was part of the fun as he dressed each year as a Disney character. Ursula and the Genie were his best performances. Parents cheered on their children and the younger set clapped with glee. If I ever find the photos, they would be priceless to share.

I recall the lure of those summer nights unveiling themselves as if it was yesterday. 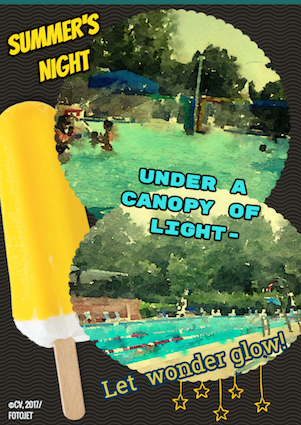 
You can find another one of my poems about a summer night here and continue to wonder at Wonderopolis.

Slice of Life Tuesday is about to begin on Two Writing Teachers. Join me there. 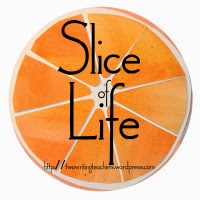 Posted by Carol Varsalona at 11:24 PM